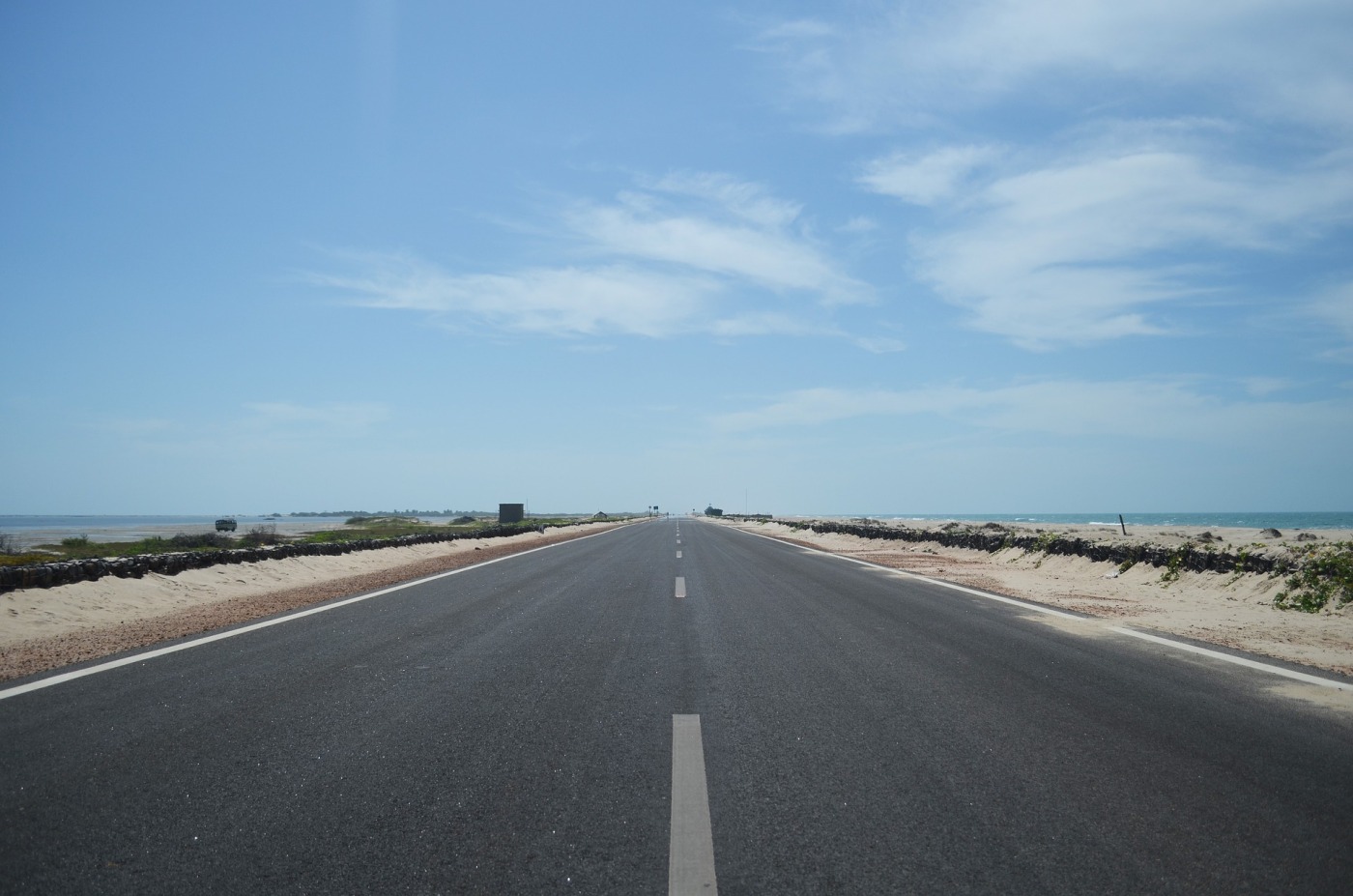 Dhanushkoti, the ghost town – puzzled for not knowing in which category a visit to this place will come under. Nothing divine as no temple exists here. Nothing entertaining as there are no rides or malls. No amazing sceneries with mountains or hills but this place is every traveler’s dream and was mine too. A 1.7 million-year-old bridge that NASA has confirmed is in existence to those who had doubts about it. And these stories surrounding it was more than enough to make this place so popular.

I prefer to use wikipedia to mention

“Where is Dhanushkoti”. It says Dhanushkodi is an abandoned town at the south-eastern tip of Pamban Island of the state of Tamil Nadu in India.[1] It is south-east of Pamban and is about 24 kilometres (15 mi) west of Talaimannar in Sri Lanka. The town was destroyed during the 1964 Rameswaram cyclone and remains uninhabited in the aftermath.

But I paid a price for being so late in choosing this place for the visit. The struggle to reach Dhanushkoti from Rameswaram was one thing I want to savor. That was the only mode of transportation possible between Rameswaram and Dhanushkoti earlier. And the same mode of transport also used to ban for the trips in the late afternoon for security and climatic reasons. Experiencing the travel in old model jeeps on Sand dunes was no longer available to anyone. It was all over – no jeeps, no bumpy rides. But instead, it looked like a freshly built tarmac road. A road as smooth as a black silk saree with white border on both sides. And on an honest note, this made a bad day to start with. 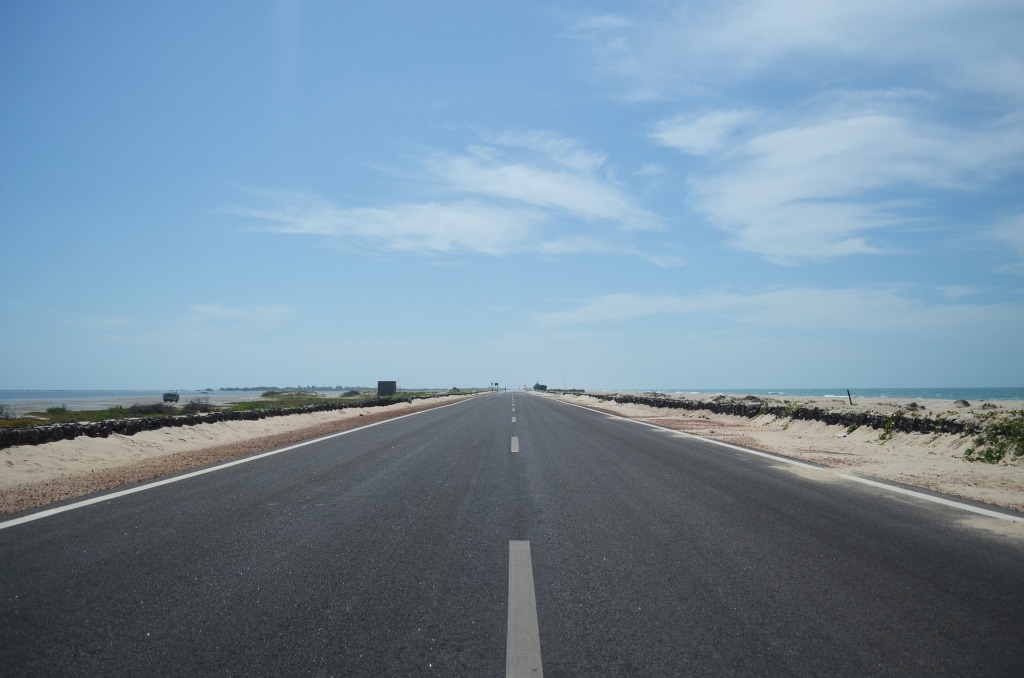 The disappointment was hard to explain through words. The naturality that expected for this trip by reading many travel stories and blogs became history with one mere sight of blacktop road leading to Dhanushkoti. On speaking with the locals later, it realized that it was done for the Prime Minister’s visit during our former president Dr. Kalam’s birth anniversary.

But it was not the right time to mourn on something which was beyond our scope. So letting curiosity take over the disappointment, we started our journey with a brief visit to Kothandaramaswamy Temple (Dedicated to Lord Rama) which is believed to be more than 1000 years old. This temple survived both nature’s fury of cyclone in 1964 and the Tsunami in 2004. This is located almost on the midway from Rameswaram to Dhanushkoti.

Approaching Dhanushkoti we experienced the unnatural silence surrounding the area in reality. Though expected, as mentioned in almost all travel write-ups about this place but it made a little bit surprised. Traditional fishermen were still using huts made from coconut leaves seen on both the shores of the sea. Rumblings remained intact from the deadly cyclone of 1964 were visible. Not a single shop or small tea stalls had seen on the way. And all these things made to think that we were traveled back to few decades within a few minutes. Comfort and luxury seemed to be an aberration here.

A ROAD STRIP BETWEEN TWO SEAS

And that eerie feeling for being in a ghost town as it is known to be didn’t last for too long too. The fact that we were traveling between two seashores was enough to overcome all those unpleasant thoughts. At the final point where we need to get down, the feeling of silence has changed to being in joyful expressions. The area was a crowded place with many tourists and their vehicles trying to park on both sides of the road.

We were in a place where another country is said to be visible. Or in the historically important area where Lord Rama, Lakshman, Hanuman, and his Vaanar sena might have spent the sleepless night by thinking about how to reach Raavan’s fort and get back Sita Devi with the bridge they constructed ahead was worth to enjoy the moments with the only question prevailing, “Why was so late to visit this place?” 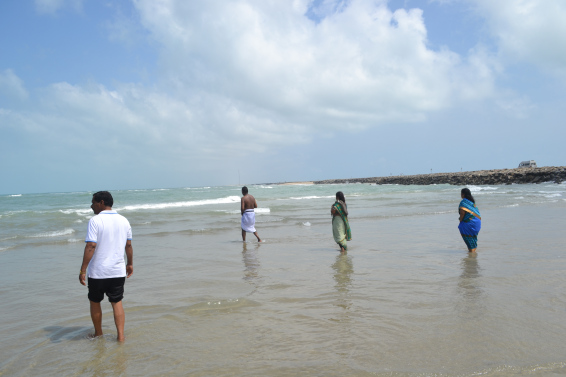 Not sure though whether we had seen SriLanka or not, but the mobile operator was so prompt in instantly delivering a message. The message was like “wishing a pleasant stay in SriLanka and Roaming charges will apply too for any calls”.

Every visitor could see here, only sea all around except the road behind just traveled. The sea can be seen on the west side while traveling through the neighboring state of Kerala and the opposite in Tamilnadu. But it must be a rare feeling for anyone to wander in between two great oceans through a strip of a road piece which ends abruptly with a post.

@ THE CONFLUENCE OF THREE SEAS

That beauty is a thing of happiness for any visitor. Never in any other place, people are surrounded by sea from all three sides. It was a sight that will behold for time to come. It is in fact where one ocean is joining with others or can we call it Saagara Sangamam?. No wonder someone from the group raised a question that why this place doesn’t look popular through movies. Any restriction by Govt: but no clue, all those things were not a point for discussions though.

It was time to do some wet games and decided to move towards the Bay of Bengal side first. Not sure whether exactly it is the Bay of Bengal or not but geographically it makes sense and the calm and clear water approaching the shore in a very peaceful manner was almost matching with the descriptions read about it. Suddenly someone was trying to point out to the location of Ram Sethu, that particular word from the crowd was enough for everyone to get a feeling of blessing. 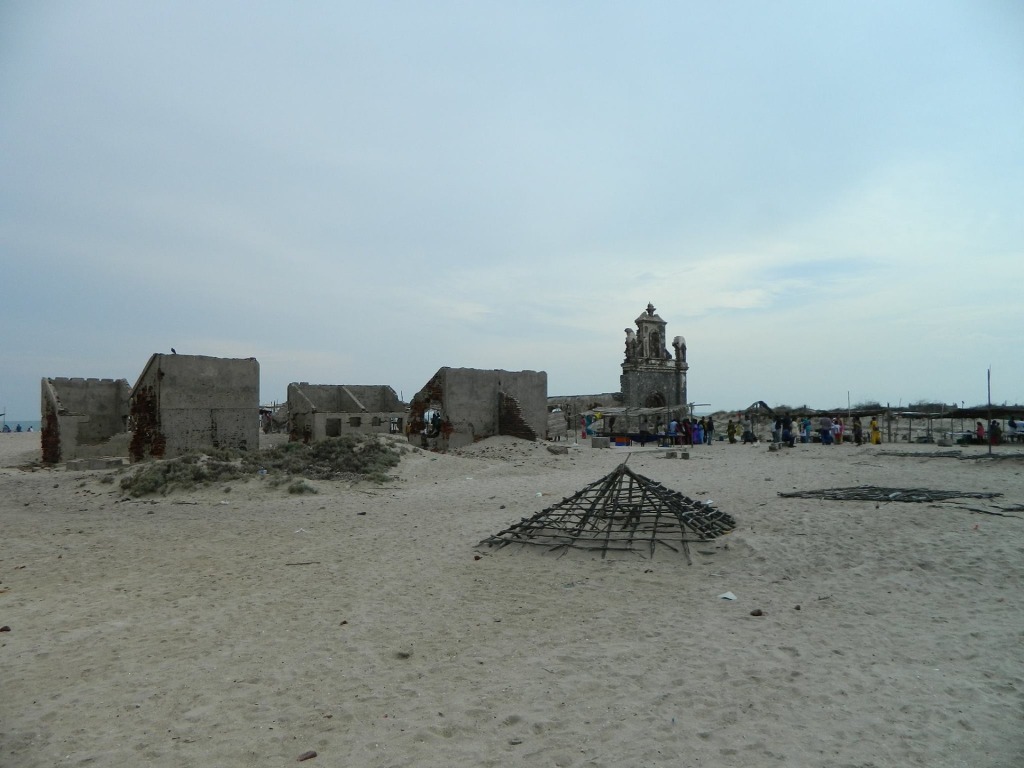 NASA AND A 1.7 MILLION-YEAR-OLD BRIDGE

It is very difficult to explain about Ram Sethu in few lines. Everyone knows about Lord Rama, Lakshmana, and Sita and how the ten head figured Ravan from Lanka had kidnapped Sita and made a refugee there. The myth goes in the way that a Monkey named Nala has been credited for the construction of a bridge with floating stones for Lord Ram to travel all the way to Lanka for bringing back Sita. And the moment I started wondering whether it was possible long back to construct a bridge of about 30 km in this way or is this really true, the news report flashed through the mind in which, NASA has confirmed the existence of such a bridge.

Sun was gradually showing its might with the temperature soaring. And it doesn’t seem to be a deterrent in spending as much time in the sandy beaches as a kid. Excursions during college days were flashed through memories. The nights spent together with college mates in one of the peaceful beaches among the coastal belt of Kerala viz Kollam brought many nostalgic memories.

After a few minutes, we moved on to the Indian Ocean which lies less than 100 m across the road. If you wonder how it possible, u have to see it in reality. May be the only place in India where you can crisscross between two oceans or you enlarge its google map, then you may be able to find its true meaning. 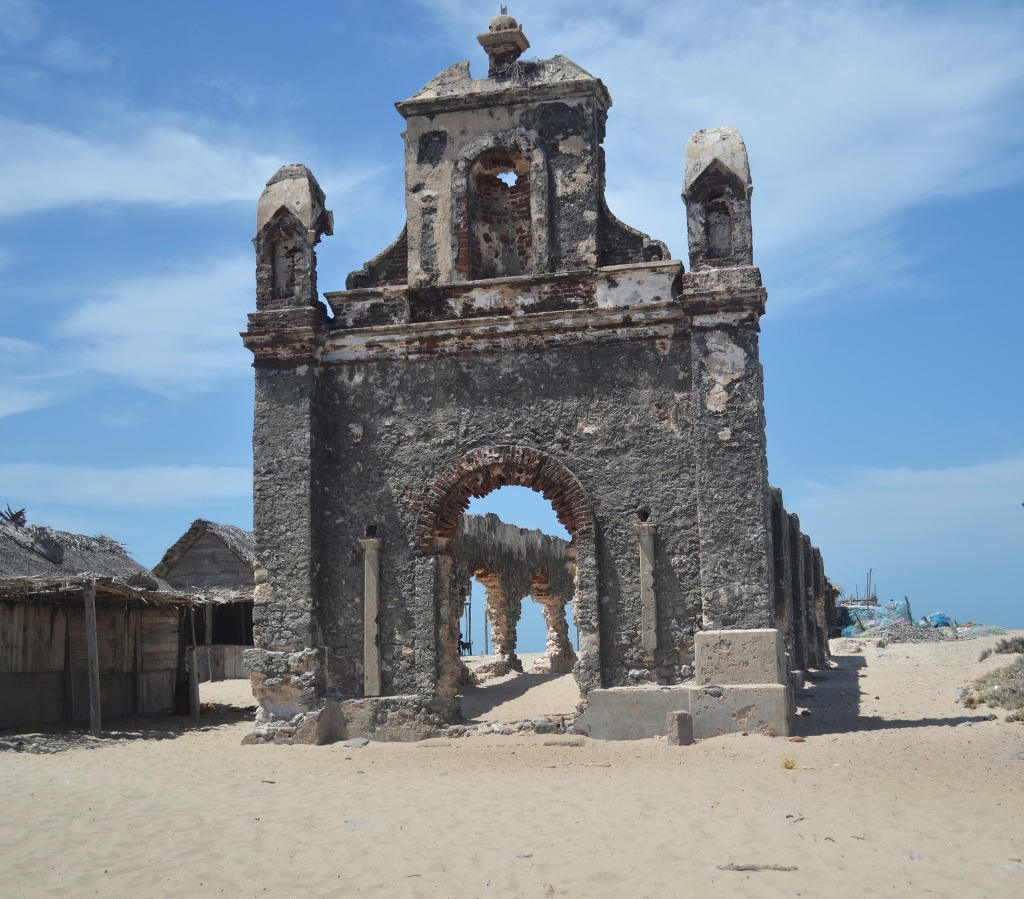 This place looked entirely different than the other side. Looked like almost all the people who came to Dhanushkoti were gathered on this side. The beach was spread across a small length only which made it a crowded place. People had seen taking baths, posing for photos, exploring different ways to capture a perfect selfie shot. Once we are into the beach, we too started playing with the waves approaching the shore. Tried for collecting sea water in the palms and throwing to other friends, Also shouting to take some perfect snaps, and jogging in and out of the waves all made the trip a real fun and memorable one.

While walking back alone to the vehicle it was like, one couldn’t distinguish whether it was a feeling or there really exists a mysterious calmness in the entire place.

WHY IT IS GHOST TOWN

This small stretch of land is also known as ‘ghost town’ from many books gone through. I wonder if any of the places affected by the Tsunami in 2004 remains as it is to remind ourselves about the tragedy. But what this place famous (or infamous) for is that its appearance is enough to convey the tragedy to anyone who comes to this small picturesque place.

The magnitude of a cyclone and how the sea waves with which we play on the beach can become monsters of death were still evident to everyone. The skeletons of the church, the water tank, and other buildings still standing tall. As if it was proof to understand the extent of devastation due to the cyclone of 1964, A disaster that literally converted itself this place to a ghost town. It was a scary feeling when remembered about 100 plus traveler’s fate in that unfortunate train which vanished for eternity in the fury of sea God. 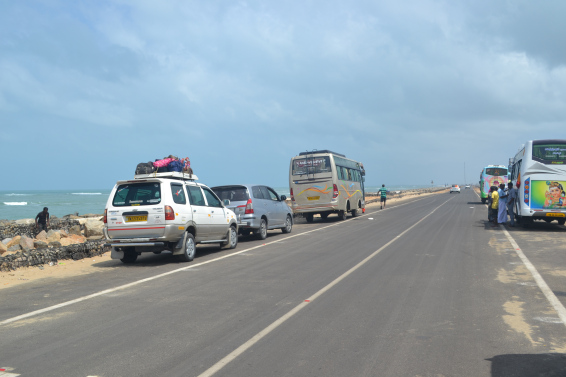 OLD IS GOLD – HERE IT IS CONSTRUCTION

On a positive note, as a Civil Engineer wondered too. Because even after the cyclone in 1964 and the Tsunami in 2004, the foundation and most of the superstructure found to be not damaged. It was still standing with a distant look of “building under progress”.  Salute to the designers and Engineers worked then. May be because that time there may be no corruption and bribes unlike nowadays.

On return back it is seen that some rock samples were kept in a large water body in one of the temples we visited. These stones were floating similar to the one used for Ram Sethu as they claim to be. Seems like a practical demonstration to clear any doubts on the floating bridge which Monkeys made for Lord Rama.

History and mythology remain forever despite any man made changes happens for years. Because this is the land that no one can ignore its importance. Whether it is the story dated back millions of years ago about Lord Ram, Lakshman, Ravan, etc. Or the emotional attachment this sea side village has with the memory of great Dr. Kalam or with India’s first sea bridge.

7 thoughts on “DHANUSHKOTI – STORY OF A 1.7 MILLION YEAR OLD BRIDGE”